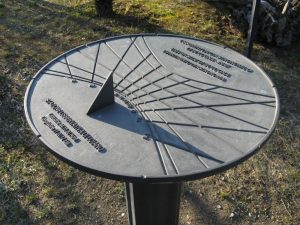 The solar clock, or sundial, is the earliest type of timekeeping device, which indicates the time of day by means of the position of the shadow of an object exposed to the sun’s rays. As the day progresses, the sun moves across the sky, causing the shadow of the object to move, indicating the passage of time.

The plane of the Sundial in Loiano is parallel to the horizon, and its 12.00 line passes through the plane of the Local Meridian, namely the North-South line. The length and direction of the shadow, which vary during the day, measure the flow of time.

The Babylonians, Egyptians, Greeks and Romans, as well as peoples of the Middle Ages, divided the day into hours using the variation of the shadow. The hours were unequal, or “temporal”. There were twelve hours during the day (from sunrise to sunset, the sixth hour indicated noon, the twelfth the sunset) and the same number of hours at night (from sunset to sunrise). The hours were equal during the same day, but the daylight hours were longer in summer and shorter in winter. Mid-afternoon, for instance, belonged to the kingdom of the night in winter, because the twelfth hour of light ended half an hour before our 5pm. This time of day was still in full sunlight during the summer, in which it  corresponded approximately to the ninth of the twelve hours of light.

The Church maintained the division of the day into twelve hours. The Benedictine Rule introduced the canonical hours, the hours that marked the prayer. Morning at first dawn, First hour at sunrise, Third hour at mid-morning, Sixth hour at noon, Ninth hour at mid-afternoon, Vesper at sunset, Compline one hour after sunset, Night prayer over the eight twelfths of the night. Keeping the same time reference points (sunrise, the culmination of the Sun, and sunset), the canonical hours replaced the hours inherited by the Romans.

Mechanical clocks, from the 1300s onward, started the beginning of a great revolution in the measure of time. The hours became twenty-four. They also began to indicate the beginning and end of the workers’ day and the market’s opening and closing times. Therefore, work was no longer measured in days, depending on the motion of the Sun, but in abstract and secular hours. The time of the merchant replaced the canonical hours. In Italy, the twenty-four hours were numbered from evening to evening and dawn and noon fell at different times depending on the season.  Dawn moved almost four hours during the year and noon (6 pm on the equinox) fell between 5 pm and 7 pm. Almost daily, a clock adjustment was necessary in order  to keep it in phase with the passing of the seasons. Unlike in cities, life in the countryside continued to be regulated for many more years by the “natural” clock, namely, by the Sun and the canonical hours.

In other European countries, the measurement of time evolved with the division of the day into two equal 12-hour periods. They started at noon and midnight and were indifferent to dawn and sunset. In this way, the clock no longer had to be adjusted daily. A sundial was enough to periodically verify the conformity of operation.

In the first decades of the eighteenth century the pendulum used to regulate the movement of clocks increased in precision. Many understood that the Sun was no longer a suitable instrument for measuring time. Its apparent motion along the ecliptic, indeed, was not regular and the Sun did not pass through the meridian every 24 hours. Compared to the time indicated by a clock, the Sun shows noon with a difference between 16 minutes more and 14 minutes less (this difference between the true solar time and the uniform time of the clock is called the equation of time). These extreme values are reached only twice a year: in general the difference remains within five minutes (for about 200 days) and in four days the indications are the same.

The clock became the “real” regulator of time. A fictitious Sun was born, one that moved regularly. The average time had been created, the time of the clock.

The Sun clock can always be visited during the day and is located outside the Cassini Telescope.