The Euclid Mission and the origin of the accelerating Universe

Euclid is a medium class astronomy and astrophysics space mission of the European Space Agency (ESA). Selected by ESA in October 2011, it will image billions of galaxies out to a distance of 10 billion light years across more than a third of the sky. This will allow astronomers to measure the expansion history of the Universe and the growth rate of cosmic structures. These measurements will, in turn, provide a detailed characterisation of dark matter and dark energy, and will test General Relativity on cosmic scales.

Cosmology is the study of the Universe on its largest scales. This includes the formation of the Universe and its subsequent evolution. The field began in earnest in the second decade of the 20th century when Albert Einstein published his theory of General Relativity. This provided a mathematical framework for a description of the Universe as a whole. 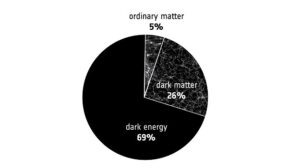 Just over a century later, it is now widely accepted that ordinary atoms make up only a small fraction of the energy density of the Universe. This means that around 95 percent of everything is now thought to be in unknown forms of matter and energy, called respectively “dark matter” and “dark energy”. Dark matter adds gravity to the Universe on the scale of galaxies and clusters of galaxies, whereas dark energy acts on the larger scale and causes the accelerated expansion of the Universe.

By combining this dark sector with ordinary matter cosmologists have constructed an extraordinarily accurate description of the Universe’s behaviour. It is called the lambda-CDM model, where lambda indicates the dark energy and CDM stands for cold dark matter.

Lambda is also known as the Cosmological Constant. It was first introduced by Albert Einstein in his model of the Universe. At the time everyone believed in the assumption that the Universe was a static, unchanging place. So, Einstein used lambda to help balance the gravity in the Universe. The journey towards our modern lambda-CDM began in 1927 with Belgium astrophysicist Georges Lemaître’s prediction of the expanding Universe from his analysis of general relativity. Two years later, American astronomer Edwin Hubble confirmed Lemaître’s prediction by using observations of distant galaxies to show that they were systematically moving away from us.

In 1931, Lemaître used further analysis to propose that the Universe once existed in an extremely compact state. This was the genesis of the idea we now call the big bang. The compact early state of the Universe was confirmed in 1966 with the discovery of the Cosmic Microwave Background Radiation (CMBR).

The CMBR is a universal bath of low energy radiation that represents the very first ‘light’ that was present in the Universe. The properties of this primeval light are affected by the amount of matter and energy of all types in the Universe, and cosmologists have been able to constrain the properties of the cosmic ingredients by analysing the CMB. ESA’s Planck mission mapped the CMBR to unprecedented levels of precision between 2009 and 2013, concluding that the Universe is made of 4.9 percent ordinary matter, 26.8 percent dark matter and 68.3 percent dark energy. The success makes it essential that we now answer the questions: what is dark matter and dark energy? Although there are many hypotheses, scientists have not been able to detect dark matter in laboratory experiments or come up with a convincing explanation for the nature of dark energy.

Both point to unknown physics at work in the Universe. In particular, dark matter cannot be explained by the Standard Model of particle physics, and dark energy cannot be reconciled with quantum theory. This is where the Euclid mission comes in.

The observations conducted by Euclid will also allow other cosmological investigations to take place. For example, from the analysis of cosmic structure we can derive the neutrino mass. Neutrinos can be considered hot dark matter because they move at relativistic speeds. Since neutrinos can change their nature in time, this is an important topic for investigation.

The OAS personnel and associates are deeply committed to the success of the Euclid mission. More than 30 people (staff and post-docs, not including associates) are active at OAS. Among all of the Euclid Consortium research areas, it can be quoted (list not exhaustive):

Last, but not least OAS Bologna is, since 2011, the INAF research structure responsible for the Euclid support grant by ASI.