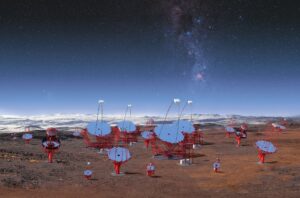 This image illustrates all three classes of the telescopes planned for the southern hemisphere at ESO’s Paranal Observatory, as viewed from the centre of the array. This rendering is not an accurate representation of the final array layout, but it illustrates the enormous scale of the CTA telescopes and the array itself.

The Cherenkov Telescope Array (CTA) is a multinational, worldwide project to build a new generation of ground-based gamma-ray instrument in the energy range extending from some tens of GeV to about 300 TeV. It is proposed as an open observatory and will consist of two arrays of Imaging Atmospheric Cherenkov telescopes (IACTs), a first array at the Northern Hemisphere with emphasis on the study of extragalactic objects at the lowest possible energies, and a second array at the Southern Hemisphere, which is to cover the full energy range and concentrate on galactic sources. The physics program of CTA goes beyond high energy astrophysics into cosmology and fundamental physics.

CTA will look at the sky in higher energy photons than ever measured before. In fact, the cosmic particle accelerators can reach energies inaccessible to human-made accelerators like the Large Hadron Collider. CTA’s unique capabilities will help us to address some of the most important questions in astrophysics. CTA will seek to understand the impact of high-energy particles in the evolution of cosmic systems and to gain insight into the most extreme and unusual phenomena in the Universe. CTA will search for annihilating dark matter particles and deviations from Einstein’s theory of special relativity and even conduct a census of particle acceleration in the Universe.

CTA will be operated as a proposal-driven open observatory. Observations will be carried out by observatory operators, then the data will be calibrated, reduced and, together with analysis tools, made available to the principal investigator.

INAF/OAS Bologna researchers are responsible of the Science Alert Generation system (SAG) software pipeline of the ACADA workpackage. Rapid and effective communication to the community requires a reliable and automated system to detect and issue candidate science alerts. This automation will be accomplished by the Science Alert Generation (SAG) pipeline, a key system of the CTA Observatory. The SAG working group develops the pipelines performing data reconstruction, data quality monitoring, science monitoring and real-time alert issuing during observations to the Transients Handling functionality of ACADA.
SAG is the system that performs the first real-time scientific analysis after the data acquisition. The system performs analysis on multiple time scales (from seconds to hours). Alerts must be issued 20 seconds from the data taking and with sensitivity at least half of the CTA nominal sensitivity. These challenging requirements must be fulfilled managing trigger rates of tens of kHz from the arrays. Dedicated and highly optimised software and hardware architecture must thus be designed and tested.

INAF/OAS Bologna is also responsible for the release management of the ACADA software.