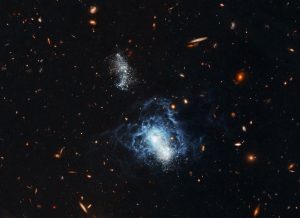 The dwarf galaxy I Zwicky 18 observed with the Hubble Space Telescope.

The study of stellar populations, galactic astrophysics and their cosmological implications is a very active research field at the INAF OAS Bologna since its foundation. The interests range from the evolution of galaxies, to Galactic and extragalactic star clusters, from chemical evolution to variable stars.These studies are based on an intensive use of the most advanced ground-based and space instruments available today at all wavelengths. Comparison to theoretical models is intensively used to derive the physical properties and the evolution of the structure analyzed.

Our research is carried out in collaboration with many international and national institutes and, locally, with the Dipartimento di Fisica e Astronomia of the Bologna University.