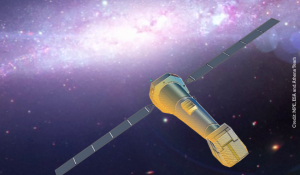 Athena (Advanced Telescope for High ENergy Astrophysics) is the next ESA X-ray observatory mission, selected in the Cosmic Vision program to address the Hot and Energetic Universe scientific theme. It is the second L(large)-class mission within that program and is due for launch in early 2030s.

Athena will study the physics of accretion into compact objects, find the earliest Super Massive Black Holes and trace their growth even when in a very obscured environment, and address how they influence the evolution of their host galaxy and environment through feedback processes.

At the same time Athena will study how hot baryons assemble into groups and clusters of galaxies, determine their chemical enrichment across cosmic time, measure their mechanical energy and characterize the missing baryons which are expected to reside in intergalactic filamentary structures.

Athena will also have a fast target of opportunity observational capability, enabling studies of GRBs and other transient phenomena, like Gravitational Waves (GW) electromagnetic counterparts. As an observatory, Athena will offer vital information on high-energy phenomena on all classes of astrophysical objects, from solar system bodies to the most distant objects known.

With its unparalleled capabilities, Athena will be a truly transformational observatory, operating in conjunction with other large observatories across the electromagnetic spectrum available in the early 2030s (like ALMA, ELT, JWST, SKA, CTA, etc).