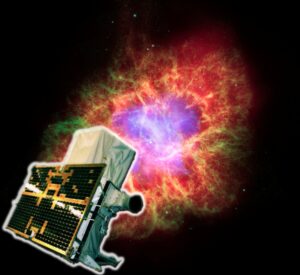 AGILE (Astro rivelatore Gamma a Immagini Leggero) is an Italian high-energy astrophysics mission dedicated to the observation of the gamma-ray Universe. It was successfully launched on 2007 April 23 from the Indian base of Sriharikota, and was inserted in an equatorial orbit with very low particle background. Its very innovative instrumentation for the first time combines a gamma-ray imager (sensitive in the energy range 30 MeV-50 GeV), a hard X-ray imager (sensitive in the range 18-60 keV), a calorimeter (sensitive in the range 350 keV-100 MeV), and an anticoincidence system. The instrument is unprecedently light (100 kg) and the most compact ever operational for high-energy astrophysics (approximately a cube of about 60 cm size) with excellent detection and imaging capability. Satellite data are collected by the ASI ground station in Malindi (Kenya), then quickly transferred to the Satellite Operations Centre in Fucino, transferred, preprocessed, and stored and analyzed at the ASI Science Data Center (ASDC) in Frascati. In parallel the pre-processed data are transferred at INAF/OAS Bologna for a fast science alert generation, thus assuring a very rapid response to gamma-ray detections, obtained by special quick look analysis programs and coordinated ground-based and space observations. During its operations AGILE surveyed the gamma-ray sky and detected many Galactic and extragalactic sources: AGILE discovered gamma-ray emission from the microquasar Cygnus X-3, detected many bright blazars, discovered several new gamma-ray pulsars, surveyed the Galactic plane with simultaneous hard X-ray/gamma-ray capability, discovered emission up to 100 MeV from Terrestrial Gamma-Ray Flashes. The 2012 Bruno Rossi Prize of the American Astronomical Society has been awarded to Marco Tavani and his team for the discovery of gamma-ray flares from the Crab Nebula.