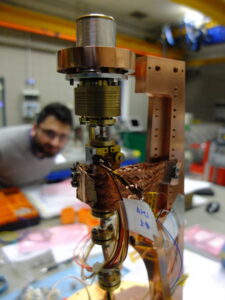 ALMA is located in the middle of the Atacama Desert on the Chajnantor plateau. Its privileged position is ideal for listening to the distant Universe, at 5OOO meters above sea level and with extreme aridity. Due to its proximity to the equator, ALMA can observe most of the sky (87%), including most of the northern hemisphere. ALMA revolutionized the study of the formation and evolution of galaxies, the study of star formation and extrasolar planetary systems, and the study of the chemistry of organic molecules in interstellar space and recently contributed to the incredible measures of supermassive black hole in M87. The 66 antennas, scattered on the plateau, are distant up to 16 km from each other, work in unison to form an interferometer. At the antenna’s foot, the cryostats host the receiver in the 9 observing bands.

From 2014, the studies carried by the Cryowaves laboratory (OAS Bologna) with the Arcetri Astronomical Observatory led to the design of a prototype, demonstrating the possibility of building receivers with previously unthinkable sensitivity and frequency extension. The observation band of the receiver is 53% and ranges from 67 to 116 GHz thus extending the technical and scientific capabilities of ALMA.  Today with the GARD group of the University of Chalmers (Sweden) and NOVA (Netherlands Research School for Astronomy) (Holland), OAS Bologna with the Cryowaves lab is designing these receivers which, after the CDR (Critical Design Review), will be produced, tested, optimized  and shipped to ALMA  by the same consortium (73 receivers).

Another challenge is going to finally complete.  With the band 2 ALMA functionality will be completed by placing the last missing radiometer at the focus of the Chilean antennas.