LiteBIRD “Lite satellite for the study of  B-mode polarization and Inflation from cosmic background Radiation Detection” is a space mission dedicated to the study of the Cosmic Microwave Background (CMB).

LiteBIRD has been selected as a “Large Mission” by the Japanese Space Agency JAXA, who is the leader of a worldwide collaboration that includes Japan, USA, Europe and Canada. Currently the project is in phase A with a launch scheduled for 2028.

The Italian collaboration is comprised of the Italian Space Agency (ASI), INAF and INFN together with several Universities and the Scuola Internazionale Superiori di Studi Avanzati in Trieste.

LiteBIRD represents the fourth generation of satellites dedicated to the CMB following its predecessors COBE, WMAP and Planck and it will be the first completely dedicated to the CMB polarization. LiteBIRD’s primary goal is to map the microwave sky in polarization with an unprecedented sensitivity on angular scales greater than 20’. With its 15 frequencies it spans a range from 40 GHz to over 400 GHz, optimized for the removal of the contamination of astrophysical emissions as the Galaxy’s signal. It is composed of three telescopes: one reflector at low frequencies (Low Frequency Telescope), two refractive ones at intermediate and high frequencies (MHFT, Middle High Frequency Telescopes), all cryogenically cooled to very low temperatures around 5 K. 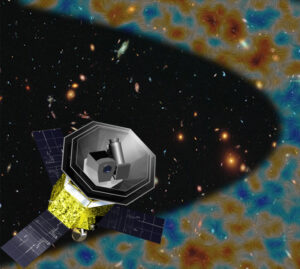 It will be the first satellite to mount refractive telescopes in space with a rotating half wave plate for the polarization splitting, a technology that allows to reduce the 1/f noise.

The primary scientific goal is the quest for the primordial gravitational waves through their B-mode polarization signal. In terms of the ratio between the amplitudes of the gravitational waves and the density perturbations, called r, LiteBIRD will have a sensibility of the order of 0.001, improving current constraints of a factor 30. Thanks to this high sensitivity LiteBIRD will discern among different inflationary models compatible with current measurements and will probe if inflation occurred at an energy scale of 10^16 GeV, an energy 12 orders of magnitude higher than the ones reachable in particle experiments on Earth. Together with the B-modes LiteBIRD will also provide a cosmic variance limited measurement of the E-mode polarization that will allow the study of the reionization epoch and several extensions of the standard cosmological model with unprecedented accuracy.

During this phase, the contribution to the scientific part is focused on the forecasts of the scientific results that in coordination with the instrumental design and data analysis pipeline developments allow to optimize both aspects and maximize the scientific outcome of the mission.

The activities are focussed on three different areas: 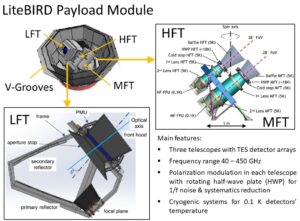 The Italian contribution on the instrument is focused on the design, realization and testing of the couple of MHFT telescopes with responsibility of the development of three experimental lines:

INAF-OAS will support the calibration and verification campaigns of the MHFT at the subsystem level using measurements at cryogenic temperatures in the operative range of the telescope ( T </= 5 K)  of the radiofrequency and thermal properties of the materials and units used in the telescope.