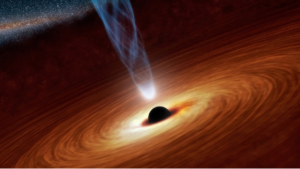 High-energy, or relativistic, astrophysics encompasses all Galactic and extragalactic sources characterised by high compactness (i.e. high mass-to-size ratio), typically: white dwarfs, neutron stars, and black holes from a few to 109 solar masses.  Compactness causes the matter or plasma surrounding these sources to move with velocities that are close to the speed of light, often in highly asymmetric and collimated geometrical structures, like jets.

These high-energy sources are unique laboratories of special and general relativity.  Their high masses, densities, energies, spins and magnetic fields favour the extraction of huge amounts of gravitational or magnetic energy that can accelerate particles to energies up to 1020 eV. Their extreme physics leads to large luminosities, of high-amplitude variability, over the whole electromagnetic spectrum from radio wavelengths to TeV energies, and presents many tie-ins with other branches of physics like particle physics and gravitational physics.  This is the reason why relativistic sources are best studied with a “multi-wavelength” and “multi-messenger” approach.

The “multi-wavelength” concept underlines the importance of observing a high-energy astrophysical phenomenon simultaneously at all wavelengths, to follow how the variations in different ranges are correlated.  The “multi-messenger” concept reflects the fact that the same physical event can manifest through different carriers of information.  For example: a binary neutron star merger produces 1) gamma-ray, X-ray and radio emission in the form of a short GRB and its afterglow, 2) optical and near-infrared thermal light from radioactive decay of freshly formed chemical elements, 3) MeV neutrinos from the cooling remnant, 4) gravitational waves from the inspiral, merger and post-merger phase.

Observations of these sources are made by the OAS scientists with a vast range of facilities both in space (Chandra, XMM, INTEGRAL, Swift, HXMT, Fermi) and on the ground (optical telescopes at ESO, GTC, LBT, TNG, REM, Loiano telescope, Medicina, Noto and Sardinia radio-astronomical stations), including the forthcoming  Cherenkov Telescope Array for TeV energies, located in Chile and Canary Islands, whose headquarters are hosted at the Area di Ricerca of Bologna and the future Extremely Large Telescope  at ESO (Chile), equipped with its powerful adaptive optics module MAORY.

Although our activity is eminently observational, we have codes and expertise for theoretical analysis and interpretation and we avail ourselves of the collaboration of theorists at other INAF branches, and at Institutes and University departments in Italy and abroad.