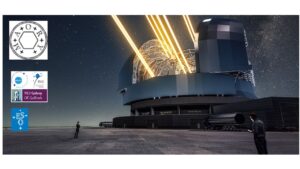 ELT (Extreme Large Telescope, see elt.eso.org for more info) is the world’s largest telescope under construction (39 m diameter) and it is considered worldwide to be one of the highest priorities in ground based astronomy.  ELT will  lead to a greater advancement of astrophysical knowledge, allow a deeper exploration of our Universe, and give sharper views of cosmic objects than ever before.

MAORY, as first generation ELT instrument, will help compensate for the distortion of light caused by turbulence in the Earth’s atmosphere which make astronomical images blurry  (Adaptive Optics, see  here for more information on Adaptive Optics).

MAORY is built by a consortium of 3 institutes : INAF (7 Institutes in Italy)  IPAG (Grenoble France) , NUIG (Galway , Ireland).  INAF is the leader institute.

MAORY will enable to take extremely high-quality images of the cosmos. See ESO web page dedicated at MAORY at  https://elt.eso.org/instrument/MAORY/  or the MAORY Consortium web page  for more details.

This illustration aims to show how the nebula NGC 3603 could be seen by three different telescopes: the NASA/ESA Hubble Space Telescope, ESO’s Very Large Telescope with the help of its adaptive optics modules, and the Extremely Large Telescope. NGC 3603 is a star-forming region in the Carina spiral arm of the Milky Way, 20 000 light-years away from Earth. Credit: ESO, Adaptive Optics web page

Coupled with MICADO,  MAORY will enable ELT to perform diffraction limited  near infrared observations.  In imaging  mode  MAORY+MICADO will provide an option with a wide FoV (50.5 x 50.5 arcsec2) at pixel scale of 4 mas and a high resolution option with 1.5 mas pixel scale over 19×19 arcsec2.  This will allow a major step forward, with a significant increase in spatial resolution with respect to HST and even  JWST (pixel scale ~ 30mas/pix).   Long slit spectroscopy will be covered with two settings: a short slit 0.84-1.48 μm, and a long slit from 1.48-2.46  μm.

The collected science cases address many of the major questions of astrophysics :

Below we show a combination of real and simulated images  selected from the MAORY White book, to illustrate the extreme capability and versatility of the coupled MAORY+MICADO. 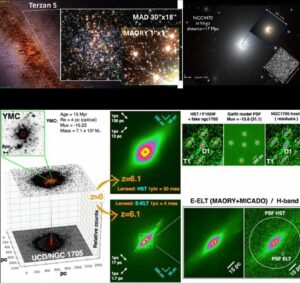 A general overview of the MAORY architecture is shown below.  The main hardware subsystems indicated in the figure are complemented by the electronic at system and sub-systems level, instrument control software and real time computer. 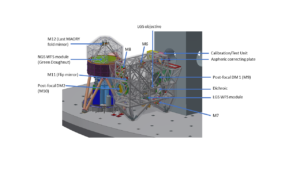 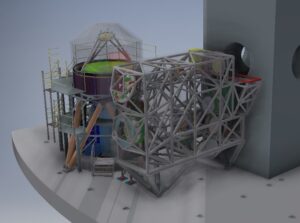 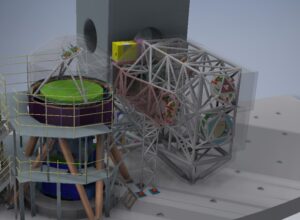 MAORY is the largest ground based  astronomical project in INAF.