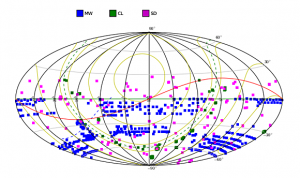 The Gaia-ESO Survey (GES)  is public spectroscopic survey presently on-going on the VLT  employing the FLAMES multiobject spectrograph (program 188.B-3002). It started on December 31, 2011 and will go on for 5 years, for a total of 300 nights.

GES  will observe 105 stars, systematically covering all major components of the MilkyWay, from halo to star forming regions, providing the first homogeneous overview of the distributions of kinematics and elemental abundances. GES will also observe about 100 open clusters of all masses, metallicity, position in the disk, and ages (except the still embedded ones).

Participants at DIFA: A. Mucciarelli, M. Cignoni (now at STScI)

For a full description and for updates, see the official GES webpage