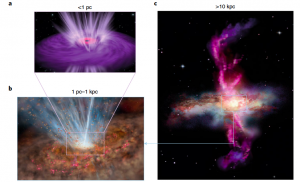 Artistic view of multiphase AGN-driven winds highlighting the different phases and scales that are involved in the outflow. The wind propagates from the central engine (< 1 pc; a), through the surrounding ISM (1 pc–1 kpc; b), out to the boundaries of the host galaxy (> 10 kpc; c). SUBWAYS will investigate the outflow in its launching phase, when the gas is highly ionized, and the presence of fast moving material can be revealed in X-rays. (figure adapted from Cicone et al. 2018, Nat. As. 2, 176)

Since its launch, exactly 19 years ago, the projects approved to use the ESA’s XMM-Newton telescope have been thousands, with time requests from few hours to several days. However, the longest programs requesting more than 12 days can be counted on the fingers of three hands. The SUBWAYS project (acronym for “Supermassive Black Holes Winds in the X-rays”) approved last week will use XMM-Newton for more than 18 days, to observe a sample of ~20 quasars in the relatively close by Universe (z~0.2). SUBWAYS passed a very competitive selection: despite its age,   XMM-Newton remains one of the most successful ESA space missions, with an over-subscription of a factor 7-8.

The aim of SUBWAYS is to provide direct support on QSO feedback models by deriving meaningful constraints on frequency and properties of the winds propagating at sub-relativistic velocity (dubbed “Ultra Fast Outflows”, UFO) on the scales closest to the central super massive black hole.
So far, the characterization of UFOs has been limited – with few exceptions – to large samples of  Active Galactic Nuclei in the local Universe. SUBWAYS will guarantee the needed step forward, observing for the first time and for an adequate time the best possible candidates among the sources at the highest luminosity, to investigate the outflow phenomenon for the first time with a statistical approach and to study the relation of UFOs with the winds observed at larger scales and in different gas components.

The project, led by Dr. Marcella Brusa of DIFA, is the third ever approved in a single XMM-Newton cycle (the seventh altogether, if proposals approved on more than one cycle are considered – among them only two other led by Italian scientists, both from INAF-OAS: Andrea Comastri and Stefano Ettori). It is also the first project of such size to be awarded to an Italian woman. The SUBWAYS team includes 47 scientists from 10 countries (Italy, The Netherlands, USA, Mexico, UK, Spain, Poland, Germany, France and Israel), among  the major experts worldwide in the fields of UFOs and galactic winds, and in general AGN and Quasars physics and evolution, both from the observational and theoretical point of view. Among the SUBWAYS team members there are Giorgio Lanzuisi, Massimo Cappi, Andrea Comastri, Mauro Dadina, Roberto Gilli, Paola Grandi and Eleonora Torresi (INAF-OAS).
The Italian community is the largest one (25 researchers involved).