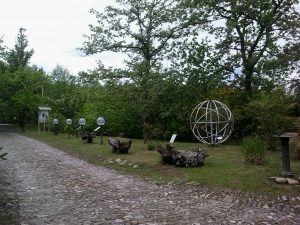 The Loiano Scaled Model Solar System shows both planetary sizes and distances in our solar system. The Sun and inner planets are located in front of the Cassini Telescope. Walking one meter along this path is equivalent to taking a trip of 15 million kilometers in space.  To provide a good representation of the relative sizes of the planets and the Sun, a second unit of measurement was used, where one centimeter corresponds to 7000 kilometers. The Sun, which has a true diameter of about 1,400,000 kilometers, is represented by a sphere with an impressive diameter of 2 meters.

The first planet you come across is Mercury, which is  located about 4 meters from the Sun (equivalent to about 58 million kilometers).
It is represented by a small ball of 7 millimeters in diameter, almost disappearing when compared to the huge size of the Sun. After three meters you find Venus, a sphere of 17  millimeters in diameter, which recalls in its colours this hellish planet, where temperatures can reach over 400 degrees Celsius!

After 3 more meters there is a blue sphere with white clouds, the size of 18 millimeters: the Earth! Our planet! How small it is!

15 meters from the Sun is Mars, which is likely to be a future goal of space travel by astronauts: it is represented by a sphere of about 10 millimeters.

Jupiter, the largest planet of our system, is located 52 meters away from the Sun and is represented by a sphere of 20 centimeters decorated  with  its typical red and dark bands, which were first noticed by Galileo Galilei in his observations of celestial bodies.

After 167 meters is Saturn, a sphere of almost 17 centimeters, the lowest-density planet in the Solar System. If there were an ocean capable of containing it, it would float on water.

Continuing along this path in the woods towards the historical telescope, after 192 meters there is Uranus (6.7 cm) and then after 300 more meters, in front of the Planetarium, you can find Neptune (6,5 cm). They are the last gaseous planets of our system.

In our model,  with a small sphere of just 3 millimeters and 400 meters from the Sun, near the entrance gate to the Planetarium, we finally have Pluto.

Pluto was actually downgraded in 2006 to a dwarf planet: for astronomers it is no longer a planet, together with Eris.

After Pluto, where should the closest star to the Sun be placed in the model? 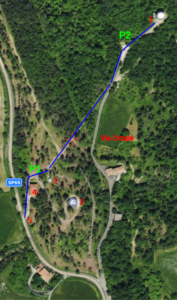 the historical Zeiss telescope (2) with a 60 cm mirror,

The Blue Line shows the Solar System Pathway which crosses the wood, from the Sun (1) to Pluto (5). Near the Zeiss telescope (2) there is the Cosmic Calendar.

P1 is accessible from Via Nazionale 11 on open days

The model of the Solar System can always be visited during the day. Thanks to its infographic panels, it does not require a guide and is suitable for all ages.

Guided tours for families are conducted on some specific days of the year (in Italian).