Deep X-ray surveys are one of primary tools to investigate how supermassive black holes (SMBHs) grow and evolve over cosmic time. They have shown that most (i.e. 80-90%) of black holes in the Universe grow during obscured phases in which large amounts of dust and gas prevent the detection of the nuclear radiation at optical/UV frequencies. They have revealed the nature of the cosmic X-ray background (CXB) emission — discovered in 1962 by the Nobel Prize Laureate Riccardo Giacconi —  showing that it can be explained as the superposition of individual, point-like sources, mostly accreting black holes. They have first probed the so-called cosmic downsizing of SMBHs, showing that the space density of moderately-luminous AGN peaks at later epochs than that of more powerful systems, paralleling the behaviour of star formation in galaxies. 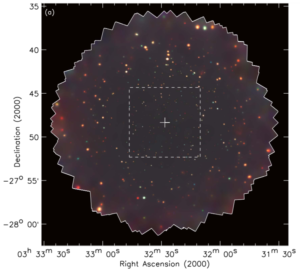 The X-ray luminosity functions built on deep survey data have also allowed an accurate reconstruction of the mass accreted onto black holes over cosmic time, showing that this is equal to that of local SMBHs: that is, all black holes seen in local galaxies must have grown during AGN phases.

In more recent years, new trends are emerging and new areas of investigations are opening.  There is now solid evidence that the overall fraction of obscured AGN is increasing with redshift, and this is particularly evident for luminous systems. The origin of this trend is still unclear. On the one hand, it has been proposed that the larger occurrence of mergers between gas-rich galaxies at earlier epochs favors triggering of obscured accretion. On the other hand, given that high-z galaxies have on average larger gas quantities and smaller sizes of their local counterparts, the column density of their Inter Stellar Medium (ISM) may reach extreme values. The larger fraction of obscured AGN at high-z could then be partly explained by a growing contribution of the denser ISM in their host galaxies.

Deep X-ray surveys and CXB modeling have been a main research lines at OAS since more than two decades. The main projects featuring a significant contribution from OAS personnel (Andrea Comastri, Roberto Gilli, Giorgio Lanzuisi,  Stefano Marchesi) are as follows: