The discovery of quasars, powered by rapid matter accretion onto black holes as massive as 1e6 – 1e9 solar masses, already in place at redshift > 6 (age of the Universe < 1 billion years), opens a new window on the young Universe. Explaining their very presence at higher and higher redshifts is a strain test for models of the formation and early growth of massive black holes. Furthermore, quasars outshine by several orders of magnitude the luminosity of typical galaxies at the same redshifts. Therefore, we can use them as “signposts” of large-scale structure in the universe, and as background sources against which we can study intervening galaxies and the intergalactic medium along their line-of-sight via absorption. Finally, the host galaxies of early quasars appear already evolved, with baryonic masses (gas and stars) comparable with the one of the Milky Way nowadays, with close-to-solar metallicities, and yet hundred-times higher rates of star formation. Quasars at z>6 are thus ideal laboratories for the study of the initial phases of growth and evolution of massive galaxies. 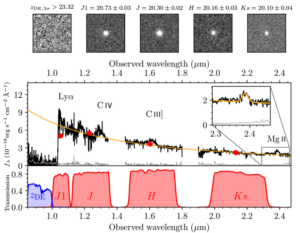 The first quasars at z>6 were discovered around the year 2000 thanks to the SDSS. Nowadays, more than 200 quasars are known at z>6, including 5 at z>7. The advent of new optical and near-infrared surveys (DECAL, Pan-STARRS, AllWISE, UKIDSS, VHS, SkyMapper …) marked a transformational change of gear in the search for these extreme sources. A further leap is bound to come from future surveys such as LSST and 4MOST, and from the space telescope Euclid. The discovery of new quasars requires the combination of databases at various wavelengths, and statistical selections based on colors and the comparison with the expected photometry of contaminants (in particular, Galactic brown dwarfs). Additional photometry and dedicated spectroscopy then enable the final confirmation of the most promising candidates. The quasar characterization requires sensitive spectroscopic observations with 8m-class telescopes, and follow-up investigations at various wavelengths (including X-rays, millimeter, and radio bands).

The Observatory is and active part of various research project aimed at the discovery and characterization of quasars at cosmic dawn.