Clusters of galaxies provide valuable information on cosmology, on the physics driving structure and galaxy formation, on the nature of dark matter and dark energy. Their matter content reflects that of the Universe (85% dark matter, 12% X-ray emitting gas and 3% galaxies). They are the nodes of the Cosmic Web, constantly growing through the accretion of matter along filaments and via occasional mergers. Clusters are thus excellent laboratories for probing the physics of the gravitational collapse of dark matter and baryons, and for studying the non-gravitational physics that affects their baryonic component. The hot (with a temperature of millions of degrees) tenuous plasma -the intracluster medium (ICM)- accounts for the vast majority (85%) of their baryonic content, and is observable in two main complementary ways, in X-ray and through the Sunyaev- Zeldovich (SZ) effect, due to the inverse Compton scattering of the CMB photons on the ICM electrons.

Our group at OAS (S. Ettori, M. Gaspari, M. Sereno, M. Meneghetti) works on the formation and evolution of Clusters of Galaxies, focusing its activities on:

We also work on hydrodynamical (cosmological) simulations to study the properties of dark matter and ICM under controlled conditions. 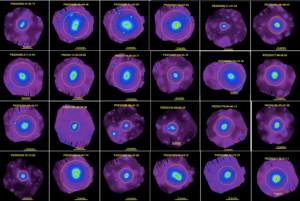