Satellites mega-constellations that are being deployed over our heads will have a relevant impact on optical/IR and radio astronomy. Statistical studies and observational data considering projects involving a large number of artificial satellites show that their impact will be relevant for telescopes with either a large field of view or with a medium-field but performing long exposures (100-1000 s). It’s a matter of fact that being able to predict which satellites will be in the field of view of an instrument at a given date-time would be useful to decide whether to observe or not, at least for observations that can be planned in advance. SatSky allow us, given up-to-date ephemeris, to predict and visualize satellites passages in the telescope targeted field.

A long list of software tools/libraries exist to predict and visualize satellite orbits, but none was written specifically for astronomical observations purposes, and have very little flexibility.
SatSky provides an open source C code, available from the GitHub repository, which starting from existing open source libraries and using the publicly available ephemeris archives (CelesTrak and Space-Track.org) is capable to predict which satellites will fall in a given sky region. The computation precision is intrinsically limited by the ephemeris data accuracy, which, as mentioned, are typically distributed as TLEs. In the future the new Orbit Mean-Elements Message (OMM) format will become the default (it uses XML and KVN – key-value notation), so it would be handy for the developers and the users to allow the usage of additional formats like CSV and JSON (the latter being the web standard). These formats not only are more easily readable, but they also foresee the addition of error estimates. 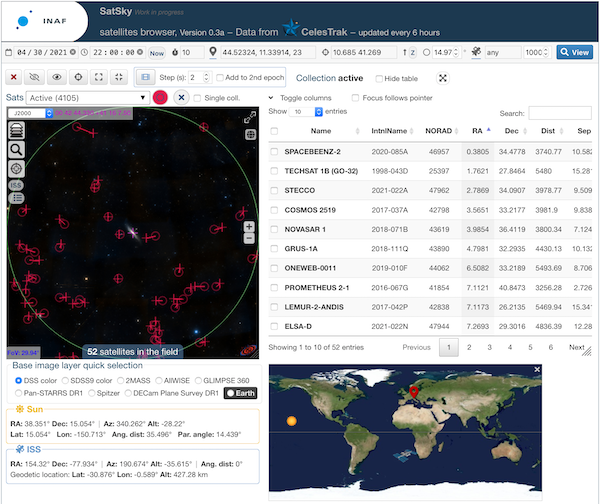 Satellites “potentially” visible from Bologna around the Andromeda galaxy on 30 April 30th, 2021 at 22:00 UT. Note that the layout of the interface can change with time.

In addition to the the C code, it is also available a web tool which allows the users to have a direct view and browsing of the satellites on the sky, as well as to directly query and retrieve the data given the geographical and sky coordinates (see
Figures). So no software installation is needed. New TLEs are automatically retrieved from the public archive every 6 hours. 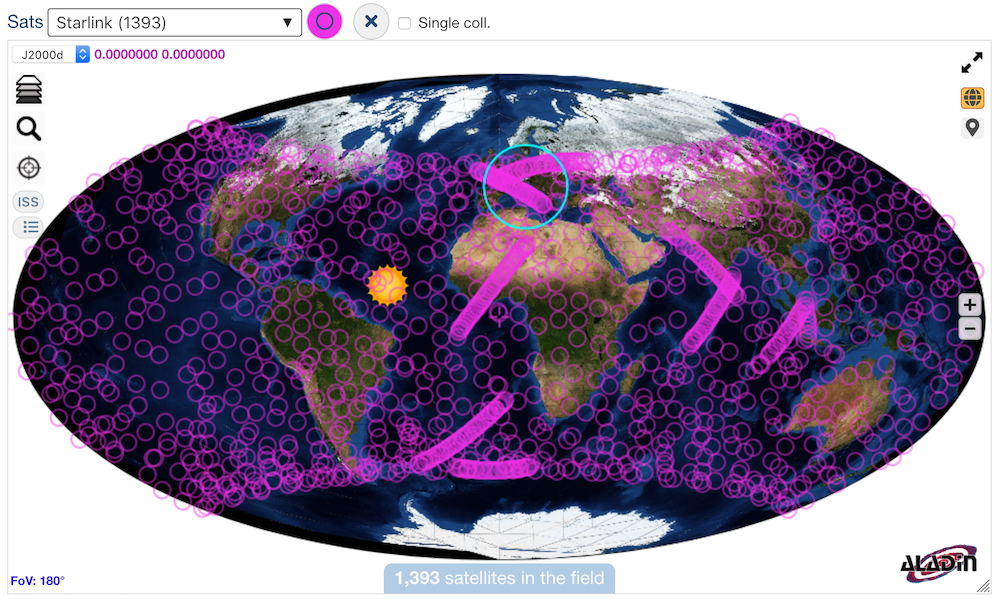 All the Starlink satellites present in the sky at the end of April 2021. The 30 degrees cyan circle is centered on Bologna.