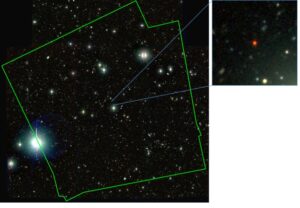 The field of the quasar J1030+0524, observed in the r, i, z bands with the Large Binocular Telescope. The quasar appears as a point-like source detected only in the reddest bands. The field observed in the X-rays with Chandra is marked with a green contour.

Quasars are massive black holes experiencing a phase of fast accretion. They reside in the center of galaxies and they are fueled by large gaseous reservoirs, which heats up due to friction and falls into the singularity. The released energy makes quasars the most luminous, non-transient sources in the Universe.

Quasars are ideal laboratories to study the Universe. On one side, because they are so bright, they can be identified and characterized at the farthest distances, thus acting as signposts of the large-scale structure and of the first mass overdensities in the young Universe. Moreover, they can be exploited as background sources to study the imprint, in absorption, due to the otherwise-invisible gas between the quasars and us. On the other hand, the study of the quasars themselves provides us with new and precious insights on how the first massive black holes formed, on the black hole demography along different cosmic times, on how they accrete material from the host galaxy, and how the enormous energy release affects the evolution of the galaxies where they reside.

OAS is actively engaged in all of these lines of research. OAS staff is involved in the search for new quasars at the furthest distances, and in their characterization; in the study of their environment and of the large-scale structures where they reside; in the painstaking reconstruction of the process of the history of reionization of the infant Universe; in the study of black holes, their host galaxies, and of the repercussions of the black hole activity on galaxy evolution.