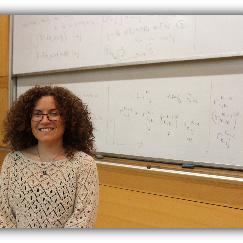 Globular cluster mergers and star formation at the Galactic Centre

Nuclear star clusters (NSCs) are dense stellar systems known to exist in galactic nuclei. Although their evolution is connected to that of the host galaxy, their origin is still unknown. Two complementary formation channels have been proposed so far. In the first one, globular clusters (GCs) inspiral to the center of the galaxy, merge and build up the NSC. In the second one, the NSC forms through episodic star formation events happening in central stellar discs, similar to the one observed at the Galactic Centre. In this seminar I will explore both these mechanisms by using N-body simulations and models constrained by observations from the Milky Way (MW). I will illustrate how an NSC formed through the accumulation of GCs shows properties that makes it comparable with the MW NSC, including significant rotation while populations born at different epochs around the central supermassive back hole present different morphologies and kinematics. While, for the first time, we prove that the cluster mergers are a viable mechanism for the formation of NSCs, we also conclude that star formation in central discs can reproduce the observed properties of multiple stellar populations in galactic nuclei differing in age, metallicity and kinematic properties.